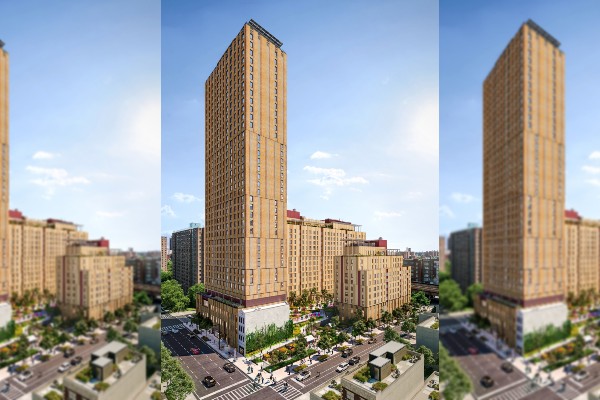 Jonathan Rose Companies, L+M Development Partners, and Acacia Network today announced the closing of $223 million in financing for the second and final phase of Sendero Verde.

Phase two of Sendero Verde will include 347 units of affordable housing serving a variety of income tiers, from formerly homeless to 90% of Area Median Income, as well as one superintendent’s unit.

Once both phases are completed, Sendero Verde will include a senior and youth community center, school, community art room, and other community amenities, as well as numerous green and open spaces for the East Harlem neighborhood.

Phase two is expected to begin construction in the coming weeks, to be completed in 2024. The project will have a 60-year regulatory agreement and will benefit from a 40-year tax abatement through the Article XI.

The project is also funded through a letter of credit from Citi Bank and syndication of federal low-income housing tax credits and solar investment tax credits as well as New York State Brownfield Tax Credits to Goldman Sachs.

“Sendero Verde’s mix of incomes, passive house design, plaza, gardens and more than 85,000 square feet of community space serving education, youth, and senior activities and health needs provides a model for the next generation of communities of opportunity,” said Jonathan Rose Companies President Jonathan F.P. Rose. “We are so grateful for the support of our community neighbors and the local Community Board, our partners, and the city agencies that made this project possible.”

The residential portions of the project will be certified to Passive House standards. Passive House is a strict energy efficiency standard that serves to reduce the overall energy consumption of a building by 30-70% over typical construction.

Upon completion of its second phase, Sendero Verde is expected to be the largest multi-family development in the nation to meet Passive House standards.

“Sendero Verde provides a model for exactly the type of projects the city needs as we work to recover from the pandemic: affordable housing for a range of incomes including the formerly homeless, a strong local hiring program in partnership with Local 79, high-quality open space, and social services rooted in the community,” said L+M Development Partners CEO & Founding Partner Ron Moelis. “Thanks to all the essential partners on this project for helping us reach this important milestone: the de Blasio administration – especially HPD and HDC – Council Member Ayala, Borough President Brewer, Citibank, Goldman Sachs, and of course our development partners, the Jonathan Rose Companies and Acacia Network.”

Phase one of Sendero Verde, which topped off in November of 2020, includes 360 units of affordable housing and one superintendent’s unit spread across buildings two buildings, a school for Harlem Children’s Zone developed in partnership with the nonprofit Civic Builders Inc. , an area for the venerable community pillar Union Settlement Association, and an 18,000-square foot publicly accessible courtyard featuring a children’s play area, adult outdoor exercise equipment, seating areas and a stage for community events.

To accommodate the social services program, Sendero Verde Phase 1 will include 2,700 square feet of dedicated space for PROMESA Inc., including eight private offices, a medical exam room and a conference room.

“Through this innovative development that brings best-in-class housing, community engagement, and green design principles together, Acacia Network is pleased to partner to continue expanding our footprint and building on our commitment to the East Harlem community, where we’ve had roots for more than 60 years,” said Acacia Network President & CEO Raul Russi. “As a nonprofit, Latino-based organization committed to addressing the housing and affordability crisis in New York, we are proud to add 700+ affordable units that will provide permanent, stable housing to individual and families in need.”

Sendero Verde was the winning entry in the SustaiNYC RFP that was administered by HPD during the summer of 2016.

The project was conceived of by Jonathan Rose Companies and L+M Development Partners as a Community of Opportunity that would offer East Harlem not only affordable housing but also a wide array of community services and opportunities for community engagement.

“With its cutting-edge sustainable features, deep affordability, and an array of offerings for the community, Sendero Verde will be a Passive House at the forefront of affordable housing development and is exactly the type of project we strive to develop under the City’s YOUR Home NYC housing plan,” said HPD Commissioner Louise Carroll. “We’re transforming one of our largest remaining sites in Manhattan into hundreds of new affordable homes for low-income families, along with open space, community space, a new school, and critical supportive services for vulnerable New Yorkers. I thank all of our partners in the community, our sister agencies, and the local elected officials who have each taken a hand in crafting this project.”

That partnership launched with the construction of Building B and continues with this latest phase. In addition to stringent local hiring requirements, the agreement specifically requires hiring New York City Housing Authority residents living in complexes near projects built through this partnership.

L+M traditionally focuses heavily on local hiring in the areas in which it builds, and the company will continue that approach alongside Local 79.

The overall agreement will initially cover work on 3,182 apartments in Harlem, the South Bronx, and East New York, Brooklyn.

“The second phase of Sendero Verde will provide 348 affordable homes that will serve a range of household incomes representing the diversity of our city. Half of these homes will remain affordable in perpetuity, providing a lasting resource to the East Harlem community,” said HDC President Eric Enderlin. “We look forward to the completion of this transformative project, which will ultimately result in more than 700 affordable homes, a charter school, and vital community services.”